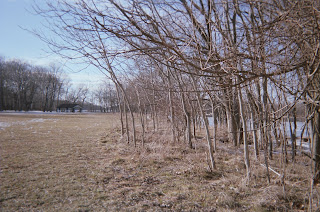 The Landmark E-Street Theater in Washington is showing the Oscar nominations for best short films this week. Today, the 5:20 PM showing, in a small auditorium, for the live action films nearly sold out, good for a weekday afternoon. The films, all from overseas, worked the problems of moral dilemmas. The distribution ("Oscar Nominated Short Films") is handled by Magnolia Pictures and here is the official website.

The first film is “On the Line” from Germany (“Auf der Strecke”, 30 min), the longest film in the set, directed by Reti Caffi. A security guard in a retail store develops a crush on a clerk and then has a crisis of conscience after an incident on a subway, where he doesn’t help someone he believes a potential romantic rival after a thug attack. The film shows a cold, gray and contradictory modern Germany, and a bit of the paranoia of retailers. A lot is shown through the security cameras. This film should not be confused with the Miramax romance “On the Line” with Lance Bass in 2001.

The second film is “New Boy” from Ireland, 11 min, directed by Steph Green, based on a short story by Roddy Doyle. Joseph, a boy from Africa, having escaped a savage attack (perhaps Darfur or Rwanda) adjusts to arithmetic class in Ireland, with flashbacks to the same math class in Africa. The pedagogy and teacher-imposed discipline are interesting.

The third film, “Toyland”, (“Spielzeugland” from Germany, 14 min, dir. Jochen Freydank, reminds one of the feature “The Boy in the Striped Pajamas”. In the 1930s in a working class town, a Gentile boy has befriended a Jewish boy whose family will be resettled to “Toyland”. The boy tries to get on the box car to go with his friend, unaware as to what is going on in the adult world.

The fourth film, “The Pig”, ("Den Gris") Denmark, dir. Tivi Magnusson and Dorte Høgh, 22 min. An elderly man goes into the socialized hospital for gastrointestinal tests and becomes attached to a painting of a pig on the wall. The hospital removes it when a Muslim man moves in to the next cubicle, causing a moral and ideological confrontation, especially between the families, as the Muslim patient turns out to be blind. There is almost a touch of “Magnificent Obsession” in the concept.

The fifth film, "Manon on the Asphalt", France, dir. Elizabeth Marre and Olivier Pont, 15 min. A young woman is struck by a car, and gives us a stream of consciousness of her last moments. The boyfriends and neighbors are engaging. There is a bit of the idea of the “locked in” syndrome of “The Diving Bell and the Butterfly” and the experience is scary .
Posted by Bill Boushka at 6:29 PM