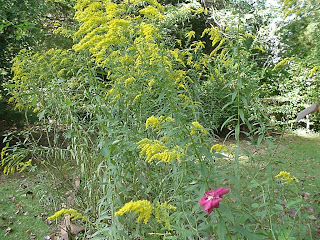 DC Shorts Showcase 4 was intended for grown-ups (and I don’t mean the kind that populated Seventh Heaven). The crowd at the Monday night show at Landmark E Street in DC was somewhat scant, but a couple of random moviegoers knew a lot about the Wall Street mess and how short selling and credit swaps work. I think “Attack of the Short Sellers” would make a good short, maybe a good SNL Digital Short for Andy Samberg.

Seriously, here were the films:

Nassuh (8 min). partly animated, apparently filmed at the University of North Carolina, tells the story of a Sufi bathhouse worker who pretends to be female to give permanents. A pearl gets lost, and his “inner identity” is exposed, perhaps. A rather Bartok-like string quartet score by Scott Longworth.

A Letter to Colleen (8 min). A meth addict writes a “love letter” in pre-9/11 NYC, Very stick-like animation is used, in black and white.

Headache (8 min). In black and white and film noir style, a man “dies” and gets reincarnated as household conveniences. He believes he can change people with his mind. This reminds me of an Omni Magazine article in the 1990s about downloading your brain and giving up your body.

Some Enchanted Evening. (5 min) Based on the Rogers & Hammerstein song from “South Pacific,” with a little bit if history about the invention of the telephone.

Waiting (21 min), perhaps the most inventive film, starts in an auto junkyard. A desperate man waits for his leased car to be repaired and goes on head trips.

The List. (5 min) A male CIA agent is doing an extreme rendition on a female suspect, who turns the tables. Apparently she has a black belt. He winds up with the female chest and bra.

The Art of Stalking (14 min). An appealing young man (Paul Dichter) rationalizes (he says “it’s complicated”) stalking a young woman to protect her. When he is arrested, he’s grateful that she even looks at him. Filmed in 2.35:1 Panavision on location in Chicago.

The Trouble With Summer. (7 min). A man enjoys a fantasy with a doll as a girl friend.

The Professional Interview (15 min). A young man shows up to be interviewed for a sales job at a bra company. He winds up being interviewed by a couple of comics in a drive-in fast food joint. He looks like he wants to throw up. Seriously, I once had an interview almost like this.

Ring-Around-a-Rosie. (10 min, Australia) seems to take off from the debauched scene from “Eyes Wide Shut”.