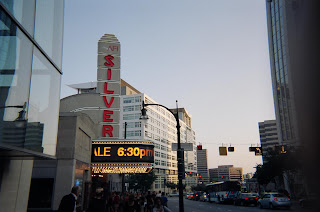 Tonight (May 29) the 48 Hour Film Project DC presented its best, in two programs. I attended the first at AFI-Silver, in Silver Spring MD. See the posting May 6 on this blog for 48 Hour links.

The challenge was to make 7 minute (or so) film based on Character of Lori or Larry Gardener, designer; Sauce as a prop, and “I’ll be glad when he’s gone” as a mandatory dialogue line. The flavor of the contest reminds me a little bit of the Project Greenlight Directors’ Contest (the most recent was in 2004). Four of the films were shot in HD, with only one HD camera available.

Here is a rundown of the show, about 90 minutes.

"Fairy Bust" by 3mm Films: two gayish high school seniors taunt each other in preparing for a senior prom, where they will have opposite sex dates, ready or not.

"The Chair" by Actors with Strings: This claymation “historical fiction” film is set in the time of Henry VIII, who did much harm. A chair designer, with a fecund and pregnant wife who does all the manual labor, gets summoned by Henry. You get to see a puppet head roll from the guillotine (blood spurts) and a puppet Henry VIII actual vomits after eating a spoiled feast with “sauce”. I happened to sit next to members of the production team. (No relation to the indie feature "The Puffy Chair.")

"Commitment" by Butch’s All-Stars. In a bar, on a Veterans Day “holiday” an ungrateful nerd (resembling the Nick Fallon character from “Days of our Lives”) has a confrontation with some Marines.

"Get Closer" by Dead City Films: This was my favorite. A young spy stalks a woman (bump-keys into her condo to plant a wiretap in the heat duct) in a highrise near the Ballston Metro in Arlington. Reminds me of “Five Lines.” At the end, the buck is passed.

"The Hauntening, Part 3" by Double Deuce Productions: two lesbians have a fight over dinner, with hot sauce, and plenty of gags.

"Road to Greenwood" by Filk Productions: a “western” set on the C&O towpath near Great Falls.

"The End" by Flat Feet Films. A young woman finds the characters in her medieval Fantasy novel entering her world and helping her complete the book (a cure for writer’s block); there is a conversation about the relative value of fantasy and “real people.” Try also Fkat Feet’s “1+1+1 = 2” (not in my group theory) here.

"Recalculating" by Habitual Offenders: Anyone for OnStar?

"Spy, Gina, Spy!" by The Quest: an improvised spy movie where the actors have to be able to swim. And she pours sauce on the guy’s T-shirt because she wants his chest.

"Sales of a Deathman" by Roadside Productions (not to be confused with Roadside Attractions). A man actually sells a hot sauce door-to-door, and has some cannibalistic motives. Anyone for "Eating Raoul"?

"American Revolution" by Roanoke: Would you believe that Lee Harvey Oswald and Jack Ruby met in a diner before the JFK assassination in 1963?

"I Love You 2" by WIT Films: This one has a touch of M. Night Shyamalan, even though it is a musical. Nerds find their computers (rather than people) are the loves of their lives, and then comes “The Happening.”
Posted by Bill Boushka at 8:20 PM