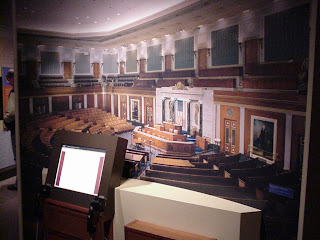 The DC Environmental Film Festival runs from March 11, 2008 to March 22 2008 at many various venues in Washington DC. Some films (like “The 11th Hour” on global warming) are already released commercial films. The PDF for the schedule is here.

Free Swim (9 min) is a “film in progress” by Jennifer Gavin. It discusses the lifestyles of native people in the Bahamas who, live “inland” and work in the imported culture and find they have no reason to learn to swim. The film recounts an “Open Water” tragedy where two boys were caught at sea and one didn’t make it back. The finished film will be one hour.

I really did not learn to swim until college, and could get across the width of the pool for a C. It’s missing from me.

Clean Water for Haiti – About Filters and Health Training (5:30)

Chris Rolling at al discuss disease among the population, the pot bellies due to diarrhea and malnutrition even when there are sufficient calories, and the high child mortality rate. The film has graphic on location pictures of life in Haiti.

YouTube link:
Also, related National Geographic Event on Water for schools, link.
The following link (on my book reviews blog) mentions some other water projects around the world (such as one in Guatemala), toward the end of the link, here.

This film takes a very strong position against mercury in vaccines and says that one sixth of all childbearing women have mercury already. The organization Safeminds is mentioned.

Yet, The Washington Post has an editorial March 12, p A18, "Keep Vaccinating: A recent case shouldn't discourage parents from having their children inoculated," link here.

This is about the Alaska Prudhoe Bay drilling area. Why can’t the drilling be done cleanly?


The Official Meatrix I

In blocked animation, “Babe” meats “The Matrix” as this four-minute short pans corporate farming as cruel to animals, immobilizing them (most of all, pigs) in pens.

This little film takes off on “Star Wars” with a parody, as grocery store items become the characters fighting the laser battles (with a trace of Andy Samberg’s “Laser Cats” perhaps). The Salad Bar scene recalls the notorious “gay bar” scene from the first SW movie, with the same John Williams music.

Jonah Soderberg 's film "The Planet" from Swedish Film (2006) is an 84 minute documentary shown at Georgetown University March 17. I could not make the venue, but a clip can be viewed at http://www.soderberg.tv The point of the film is that planet change is much more than just climate change, it is also geography change. There is a shorter version for television. The film was written by Soderberg with Linus Torell and interviews 29 experts on the environment. It may appear later in the US in international film festivals.

I cannot find it on Amazon or Netflix. I do find that it can be ordered from Sweden for about 29 Euros (about $45). I am networking to see if a North American distributor is going to pick this film up. (If anyone knows about this, please comment.)
Posted by Bill Boushka at 9:06 PM