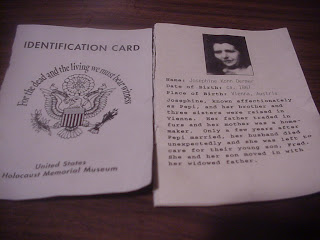 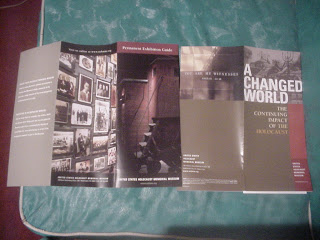 I had visited the United States Holocaust Memorial Museum at 14th Street and Independence Ave. in Washington DC in the mid 1990s, and I visited it again yesterday. A visit requires as timed ticket to accommodate groups, and cameras are not allowed inside the exhibit.

The Permanent Exhibit starts on the fourth floor and is in three sections. (1) Nazi Assault: 1933-1939 (2) (Middle Floor) The “Final Solution: 1940-1945; (3) Last Chapter. There are many newsclips and reels on television monitors throughout the museum, and there is a particular focus on American response over the years.

When the visitor enters the exhibit, the visitor sees a continuous color film about the liberation of Dachau.

There is a small theater on the upper level that shows a 14-minute short film called “Anti-Semitism.” Most of the film is in black-and-white. The film traces the history of negative attitudes toward the Jewish people back to the early days of Christianity. There has always been a rationalization that Christians have an obligation to “convert” others aggressively. The film make the point that Martin Luther, despite the reaffirmation of freedom when he posted his points and started the reformation, developed a hatred of Jews who would not convert. The Enlightenment seemed to produce some improvement, but new rationalizations for anti-Semitism were developed. Gradually, however, the Jews often assimilated into European society, especially in the professions, commerce, arts and academic areas. In some cases, society took a “don’t ask don’t tell” kind of attitude.

Because of the hardships faced by the people of Germany after World War I with the wild inflation and reparations, it was easy for politicians and demagogues to look for scapegoats and make “moral” rationalizations that the hated people had cheated the “normal” people. So Hitler could make up an argument that the Jews had, with an intellectual “snobbery,” harmed the integrity of the “Folkish” German people. At the same time, the Nazis were inventing racial theories, with no conceivable scientific foundation, that the Jews were essentially like an alien species, inferior and constituted a biological “enemy.” Furthermore, the Nazis developed the idea that only the "State" can establish what is virtuous and beautiful (that is, the "state" becomes like "Allah" or "Jehovah"), and that individuals may not do this on their own. This ideology does not make sense today, but it did appeal to emotions of the times, where people had limited information. One of the most amazing things about the Nazi reign of terror and buildup was the propaganda and manipulation of information that the people could receive. The pogrom would follow. Near the theater, the museum shows pictures of book burnings, “Fahrenheit 451” style. The conclusion of the film covers the rapid elimination of Jews from all visible areas of German society, leading up to the deportations to concentration camps. Two-thirds of the Jewish population in Europe would be murdered, a episode of genocide unprecendented im history. Other areas of the museum show similar treatment of other groups, especially homosexuals. It would be interesting to watch the Charley Chaplin United Artists film "The Great Dictator", made in 1940, and see how the ideology could be manipulated with deception.

There is also a picture exhibit of the voyage of the St. Louis (or Saint Louis) (in 1939), which was to take many German Jews from Europe (Hamburg) to Cuba, but they were never allowed to land anywhere, not even by President Roosevelt (the Coast Guard kept them out of Florida). This story was the subject of the three-hour 1976 Avco-Embassy film “Voyage of the Damned,” directed by Stuart Rosenberg, boob by Gordon Thomas.

The middle floor shows “The Final Solution” and contains an audio theater of testimonials. A box car is shown, as are models of the camps and crematoriums. Auschwitz-Birkenau, which I visited in May 1999 (30 miles from Krakow, Poland, after a night train ride from Berlin) had over 200 “dormitory” buildings laid out in a grid. Prisoners, once arrived, were completely shaved, including their bodies, so that they could not look at themselves as distinguishable individuals.

The lower floor has another film, “Testimony”, which is shown in another theater on a digital video screen. The film consists of interviews of concentration camp survivors, and includes in some cases personal accounts of their liberation. Most of them expressed a determination to survive for the benefits of their families and their people, even though their own individualities had been effaced. The film is in color. I believe that much of this was shown on PBS in the 1990s.
Posted by Bill Boushka at 7:56 AM

Did you submit your site at blogsearch.sg?

You can reach blogsearch by just typing blogsearch.sg in your browser window or click here