The Short Films of David Lynch 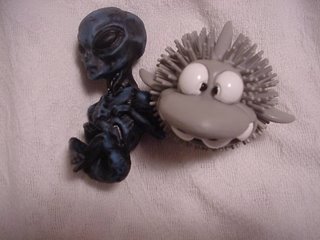 This is a video/DVD dating from 2002 with no commercial distributor, so it seems to be self-distributed to Netflix and others by the director himself.

David Lynch introduces each of The Short Films of David Lynch -- there are six of them -- by speaking into a mike in a simple black-and-white shot. Though the video dates to 2002, the films range in date from 1966 to about 1998 but tend to look primitive, somewhat in Andy Warhol vintage.

"Six Men Getting Sick" is a painting the self-animates with the stick figures doing projectile vomiting in abstract fashion, through six cycles.

"The Alphabet" is a similar animation with a woman reciting a grade school lesson, and bleeding out at the end.

"The Grandmother" (a "babushka") is the longest film (33 min.), seems to be about child abuse. A little boy rebels against his tormentor by planting a carnivorous plant on soil planted on his bed, and the grandmother enters the picture chasing his affections. The plant (Venus-fly-trap?) anticipates "Eraserhead."

"The Amputee" is very short and crude (1973) with a woman having two stumps attended to with a pedicure while she writes a nonchalant letter.

"Lumiere" is only 55 seconds and simply a progression into apocalypse.
Posted by Bill Boushka at 8:42 PM