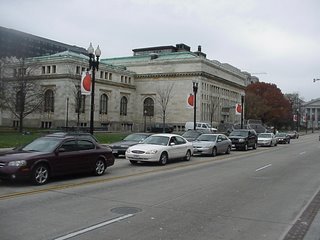 The DC Shorts Film Festival was held at Landmark E Street Cinema in Washington DC (with a few films at the Canadian Embassy) Sept. 14-21 2006. The slogan was
"Keep it short, Keep it reel." Note the hononym.

The short films illustrate the commitment that it takes even to make a short film. Many of them have extensive credits. They tend to take a simple concept (as would a short story, perhaps connecting two ideas in a simple way) and elaborate with visual, musical, and character effects.

The theater assembled a list of the best of the festival. Here is a synopsis.


Full Disclosure (about 15 min) dir. Dylan Horn, shows a probably engaged couple dining in an Italian restaurant promising to do the "asking and telling" thing. Dylan shows a barren shirtless picture of himself, and admits that he needs to mind his table manners, else drive people away. Ten years later, at the end of the film, they enjoy a wedding anniversary there and the film shows about the right amount of aging.

Bone Mixers (22.44, dir. Mike deChant and Doug Gritzmacher) is an docudrama of a Wednesday night "bone collector" -- that is, dominos party in a home in Silver Spring, MD. It brings back memeories of the poker parties my coworkers used to have Friday nights in Texas back in the early 80s.

Artistic License (23:00, dir. Michael Wohl) has a snappy actor David Lago playing David Milken, turning his job as the photographer at a California DMV into an exercise in self-expression. Too bad that he (the fictive person) smokes. He does conquer the boss. Full wide screen, compressed by cropping.

Vagabond Shoes (18:06, dir. Jackie Oudney) won the prize for best female direction. It is sumptuous jazz musical with that “Chicago” look. A homeless man with a pair of plaim shoes comes inside becomes a male Cinderella for the event, then he dematerializes, or does he?.

Victoria (6:10, dir. Marc Carlini, Cinemascope) provides a retrospect of a full life time of an elderly woman in her final moments as she lets go. There is no tunnel like in a near death experience.

A Short History of Sweet Potato Pie and How It Became A Flying Saucer (17:25, dir. Nina Seavey) was made with the help of George Washington University and shows a woman in a Washington DC assisted living retirement home who makes her baking of sweet potato pies a labor of love and creativity. Unfortunately, they become flying saucers quite literally.

Dirty Mary (19:00, dir. Stuart Rogers) is a bad girl who tempts men at bars. A couple scenes have a bit of the wine country Sideways look. She teases men, gets one back to her place, and she throws up out of a hangover. Call her Bloody Mary and call him Dirty Harry.

Zombie-American (8:27, dir. Nick Poppy) is a satire about how someone who looks “different” will be treated. The protagonist is made up as a horror film zombie, as if from "Night of the Living Dead", and can even stick himself with voodoo pins, into the forehead and nose. Clever language.
Posted by Bill Boushka at 8:12 PM